How it all started on Airport Road 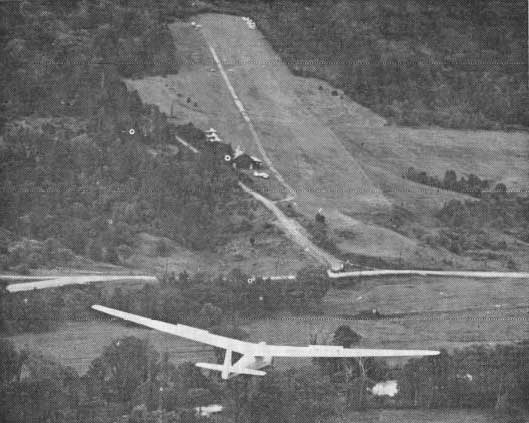 Glider about to land at Estey Air Park, early 1960's

Soaring started in the Mad River Valley in 1957 with John Macone and Alan Bemis. They used the field north on Route 100 (Estey Air Park), next to what is now Estey’s field in Waitsfield. The road there is still called Airport Road. Later, Waitsfield resident Warren Ketcham joined the operations and, together with several other old-time Valley residents, developed the current site in the Town of Warren in 1966. Warren Ketcham built the “Tower” in 1967, using a design by local architect Dave Sellers. The runway was paved in 1968.

To save the field from serious financial problems, enthusiastic field users formed Granite Intersection, Inc. (named for an old airways intersection located near the field) in 1973 and purchased the airport. The intent was to preserve the field for small plane activity. Granite is still the owner of the field and leases it each summer to Sugarbush Soaring, which acts as the FBO, and in the winter to Ole’s Cross-Country Skiing. Through the generosity of some early Granite shareholders, Sugarbush Soaring is now a major shareholder of this Corporation. Almost all the rest of Granite is still owned by field users, including Sugarbush Soaring members and local residents.

1978 was a big year for the airport and soaring in the valley. Jim Parker acquired the big hangar, which had been built some years earlier, and set-up his many-faceted operations. Largely through the efforts of Doug Terman and Duncan Gillespie, the present Sugarbush Soaring Association, Inc. (SSA) was formed in the same year as a Vermont not-for-profit corporation with the goal of furthering the practice of soaring. Myndy Woodruff set up the new tow operation using surplus military L-19 Birddogs. Sugarbush Soaring has remained a strong organization since its founding, and continues to successfully operate the field. It has been sufficiently profitable to be able to buy its present fleet of six gliders. In 2002, Sugarbush Soaring took over the towing operation, starting that year with one Piper Pawnee and adding a second Pawnee the next year.

Since its inception, Sugarbush Soaring has expanded its operations and now has two parts:

We don’t like to think of SSA as having two parts and deliberately try to blur the distinction. Nonmembers are encouraged to join in Club activities and are always most welcome. They are encouraged to become members when it is appropriate for them because it is economically advantageous if they plan to do a lot of flying in this area. Club members are encouraged to meet non-members and ride guests, help out on the flight lines, and, if qualified, give rides and instruction.

The Club has a Board of Directors elected from among the membership at the Club’s annual meeting held at the end of the soaring season. The board is a mixture of new and old members, those who fly Club gliders and ship owners, in an effort to represent the entire membership. The Club also annually elects three officers who manage its affairs.

Because most Club members including the Board members and the officers must earn livings, the day-to-day field operation is in the capable hands of our staff. Rick Hanson is our Chief Flight Instructor and Tom Anderson is our Director of Operations and Airport Manager. Rick and Tom also run special programs, such as our youth camps and soaring seminars.  John Tracy is our Chief Tow Pilot. Several other very capable people work in our office and fill out our instructor and tow pilot rosters. The flight line is manned by several youngsters who are rewarded with an instructional flight for each day they help out on the field. Many others help out on a part-time basis.

In 2006, a separate 501(c)(3) corporation, Flight Experienced for Youth (FEFY) was formed with the mission of providing financial support for the line crew and other young people with an interest in learning to fly gliders. FEFY conducts an annual fund raising campaign to finance these activities. 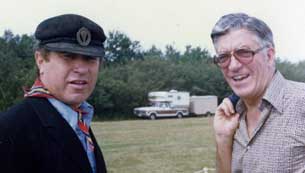 John Macone and Najeeb Halaby. Halaby was appointed by JFK as the second FAA administrator.
Halaby's daughter Lisa visited our airport several times before moving on to become Queen Noor of Jordan.