Sugarbush Soaring owns seven gliders that are available for rental, instruction, scenic rides and member use. We have an ASK-21, two PW-6's, a Schweizer 1-26, and two Schweizer 2-33's.  We also own two Piper Pawnee towplanes. 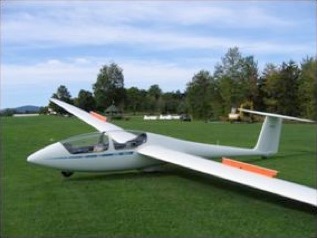 Most of our rides and advanced flight training takes place in the two-seat Schleicher ASK 21, which is made in Germany.  The ASK 21 is the longest continuous production fiberglass trainer in the world, with over 750 currently in use.  It has a T-tail, airbrakes on the upper wing only and a fixed undercarriage.  With a wing span of 55.74 ft (17 m), a 33.5:1 glide ratio and an empty weight of approximately 850 lbs, it has above average performance for a trainer, and is known for its comfortable cockpit, excellent visibility and handling, docile flight characteristics and reliability.  It is certified for 18,000 hours of service. 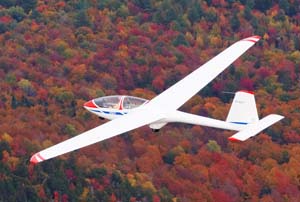 The Politechnika Warszawska PW-6U is a Polish two-seat training sailplane designed at the Warsaw University of Technology for basic flight instruction and transition training to the Politechnika Warszawska PW-5 single-seater. It was designed to be an introductory trainer with the capability of providing cross-country training as well. It has handling and performance characteristics similar to the PW-5. 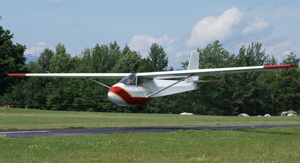 Most of our initial flight training takes place in the 2-33. From its introduction in the late 1960s until the late 1980s, the 2-33 was the main training glider used in North America. Production ceased when demand dropped off due to the import of higher-performance two-place sailplanes from Europe. Manufactured in Elmira, NY, the 2-33 makes a great trainer because it is easy to fly and is quite rugged. The 2-33 is a combination metal/fabric sailplane with a wing span of 51-ft, and a 23:1 glide ratio. 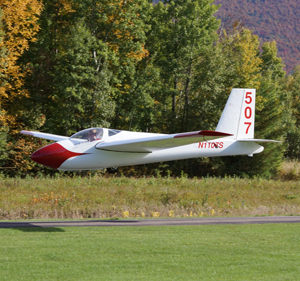 After students solo in the 2-33, they often transition into the Schweizer SGS 1-26 to gain solo experience in a different aircraft.  The SGS 1-26 is a single-place, combination metal/fabric sailplane that was built by Schweizer Aircraft Corporation in Elmira, NY.  The 1-26 is rugged, inexpensive, durable and easy to fly, making it one of the most popular sailplanes in America.  It has a 40-foot wing span, a 23:1 glide ratio and an empty weight of approximately 400 lbs.  The 1-26 and the Schweizer Aircraft Corporation both have fascinating histories.  Schweizer is unique in that it is the oldest privately-owned aircraft company in the United States (and perhaps the world).  The three Schweizer brothers built their first glider in 1930 and incorporated Schweizer Aircraft in 1939.  The first 1-26 was flown on January 16, 1954 by Paul Schweizer.  A total of 700 1-26 aircraft were produced, with production ending in 1981.  There were five different models, and our club owns an E model, built in 1971.  It was factory refurbished in 2017, and is as good as new.  Schweizer gliders helped to popularize the sport of soaring throughout the United States. 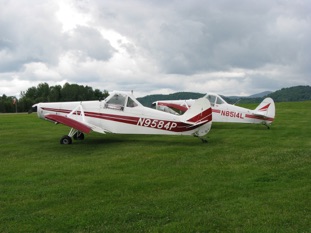 History:  The Pawnee was originally designed by Fred Weick as the AG-3.  It flew in prototype form in 1957.  Several thousand were built by Piper aircraft.  Production ceased in 1982.